Seed is not a commodity, but the basis for food security and national sovereignty

Seed is the most vital component of agriculture and the basis for food security. But seed has become the most controversial topic in the recent years due to various reasons - increasing price, monopoly and control by private companies, unavailability of good quality seeds, introduction of GM seeds, loss of biodiversity, IPR and loss of the commons etc.

India is one of the centres of mega biodiversity and farmers have developed thousands of varieties of different crops over time. Although in some regions farmers continue to grow the traditional varieties, in the highly developed agricultural regions, in the last 40 years, the traditional varieties have been literally wiped out and the farmers have become totally dependent on the market for their seeds. This has been directly caused by specific policy directions such as the promotion for hybrids and HYV's and the “limited generations system” for seed multiplication. Other programmes have given thrust on building the private seed industry to such a scale that it has become a thriving business, with literally no control over prices and quality. Farmers have become victims of this. At the same time, where ever Government agencies produce seeds, there is demand from the farmers, prices of such seeds are also very low and these are also locally suitable comapred to the privately sold ones, but production and supply is insufficient.

Added to this is the fact that the private sector has now moved on from hybrids to GM crops (as in the case of Bt Cotton) where cost escalation happened in an unprecedented manner, and monopoly is being established. They could even get IPR protection (proxy) on their seeds, and literally the seed industry has made the farmer totally dependent on them. This experience in the Bt Cotton case has even emboldened the industry to invest in research to genetically modify all the commercially important seeds in India including grains. This should be perceived as the worst threat on food and national sovereignty ever faced by the country.

Meanwhile in the last 10-15 years, in many villages farmers have started to revive some of the local varieties. Farmers preferences to traditional seeds, open pollinated varieties and locally adaptable seeds have stemmed from the fact that these have evolved over time, have a strong resilience to local conditions, vagaries of climate, pest and disease attacks and even easier and sometimes less intensive management in terms of labour and costs. The seeds developed out of hybridisation have never shown such resilience and has much less scope, as it has no history of having evolved in the locality, adapting to local conditions. Hybrids and other HYVs need more inputs also in terms of fertilizer and water; both are becoming scarce and costly now. Thus the concept of “location specific” seeds and related technology is now getting increasingly significant.

The change in attitude of the farmers from demanding HYVs to traditional seeds has triggered many programmes, spearheaded by various movements across the country, to revive such seeds insitu. A new wave of revival is spreading across, where traditional varieties of seeds are not only being conserved, but also work on farm-level characterisation, purification and improvements are showing good results. In some of these movements, even scientists from the establishments have joined hands with such farmers’ networks.

It is in this changing scenario that one needs to look at the proposed Seed Bill which does not take in to consideration this aspect at all. Any new law related to seeds should consider the enabling of this farmer and civil society effort at the village level to revive and conserve seeds and to recognise farmers as the breeders. Farmers are eventually the vehicles that must carry on this tradition of producing, conserving, multiplying and evolving so that down the generation, farming survives on the strength gained within the system rather that from outside supported by highly intensive seed production industry. Literally, there should be a bottom up approach in seed development.

Another aspect is that many states are now aiming at developing a sustainable agriculture system which is environment and farmer friendly. Experience shows that traditional varieties are more suited to this system of agriculture where the aim is to improve farm productivity along with income of farmers.. One of the main problem faced by the state governments is that they are unable to predict the problems in farming which occur due to seeds since farmers use different kinds of seeds, based on whatever is available in the market and this is leading to economic loss and ultimately loss of food security. This is very important while also considering the unpredictable climatic pattern experienced in the country. State agriculture universities should be encouraged to conduct participatory research with farmers using traditional varieties.

Moreover, there is an expanding safe food movement in the country and a large number of consumers are opting for traditional food. Some of the researches have shown that traditional varieties are nutrient rich and can help develop immunity to many chronic diseases. The organic markets in the country have already started selling such produce, and there is an increasing demand.

Seed is also food, not only for human beings but also other beings as well whose life is also dependent on us unfortunately since most of them live outside protected areas like wild.life sanctuaries . The loss of agro bio diversity will impact their existence also leading to a total imbalance in the agro ecosystem.

The Government has a moral right to ensure adequate quantity of good quality seeds to farmers at regulated prices. For that

2) Seed is not a commodity, but the basis for food security and national sovereignty

3) Seed development should be location specific, and resilient to local conditions, including pests and diseases.

5) Recognise farmer-breeders and support them rather than the private seed industry.

6) Monopoly and IPR-based restrictions should not be allowed.

Posted by Kheti Virasat Mission - The ecological movement for Punjab at 6:23 AM No comments: 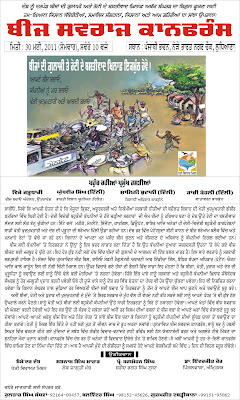 Posted by Kheti Virasat Mission - The ecological movement for Punjab at 7:34 AM 2 comments: 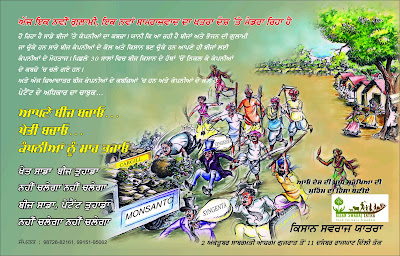 To stop IPRs on seeds/germplasm/planting material or products

· Since a nation’s food sovereignty as well as farming communities’ livelihoods is closely linked to seed sovereignty – who controls what seed is supplied, when, in what quantities, with what restrictions, at what prices and so on. This is closely connected to allowing most seed trade to be taken over by the private sector, coupled with legal regimes that allow for exclusive marketing rights in the hands of a handful of companies, along with monocultures encouraged of a few crops and few varieties even as farmers are encouraged to move away from their traditional systems of seed breeding, selection, saving and exchange. Policy makers and planners have to appreciate the intrinsic potential dangers of such a scenario; this is further borne out by the example of cotton seed in India, where an overwhelming majority of the market today is controlled by one large seed company in numerous ways; further, non-GM cotton seed is not available in the market and seed pricing has become a vexatious issue where state governments that want to protect farmers’ interests are being confronted by the seed companies against any statutory framework that regulates price and are even threatening to stop supply of seed – meanwhile, physical seed stocks with farmers and others have disappeared during the period that they depended on company-supplied seed. This scenario is potentially possible with other crops too and Seed Sovereignty is an issue that the government has to take seriously.

· The seed industry seems to believe that their returns can be maximized and their R&D efforts rewarded only if exclusive ‘ownership’ rights are conferred, linked to marketing rights of course. Civil society groups including farmers’ organizations believe that this is antithetical to the very culture of agriculture in India, which thrived for thousands of years due to the open sharing of resources including knowledge.

· Let us demand that Agri-research and extension systems have to prioritise in their projects and outlays, varietal development and distribution; farmer-led, participatory breeding programmes are to be prioritized to address issues of quality and local suitability.

· For all those seed technologies which bring in potential environmental and health hazards, such seed should be allowed even for open air trials only if there are no other alternatives present and after biosafety has been cleared through independent, long term testing in a participatory and transparent decision-making regime. In this case too, like in Point 4, state governments should be allowed their constitutional authority over agriculture for exercising their own decisions through appropriate regulatory regimes at the state level, including licensing etc.

· Regulatory regimes should also pro-actively watch out for seed monopolies/oligopolies building up and prevent the same.

· Farming communities all over India should have first priority and access to all the germplasm collections all over the country.

SAY NOT TO GM SEEDS

All are cordially invited

Posted by Kheti Virasat Mission - The ecological movement for Punjab at 7:21 AM 1 comment: